New Delhi: In a unique protest, the Trinamool Congress (TMC) MPs on Monday (July 19, 2021) cycled to the Parliament to protest against the hike in petrol prices of petrol, diesel and LPG.

#WATCH | Delhi: Trinamool Congress (TMC) MPs cycled to the Parliament today in protest against the rise in prices of petrol, diesel and LPG.#MonsoonSession pic.twitter.com/4NE72QhNjp 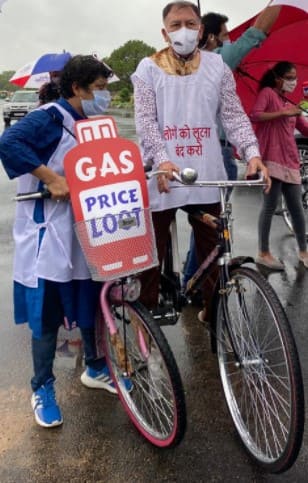 Several political parties including Congress and BSP have also protested against the increasing fuel prices across the country.

Earlier, the Mamata Banerjee-led party also said that it has given multiple notices under various Rules in both houses of Parliament on the opening day of the Monsoon session. The issues on which notices have been given include price hike of diesel, petrol, LPG and other commodities, demand to repeal farm laws, a decline in economic growth, restoration of MPLAD funds and the alleged weakening of the federal structure by the government.

Meanwhile, on the very first day of the Monsoon session of the Parliament, the Lok Sabha has been adjourned till 2 PM amid uproar by Opposition MPs.

On the other hand, the Rajya Sabha proceedings have been adjourned for an hour as a mark of respect for departed two sitting MPs Raghunath Mohapatra and Rajeev Satav.

DNA Exclusive: All about violence between Assam and Mizoram, and genesis of 150-year-old border dispute

Pakistan based Lashkar-e-Taiba shifting base into the country, Afghan govt tells India

JEE Advanced 2021 to be held on October 3: Dharmendra Pradhan