New Delhi: In view of the rising COVID cases in Rajasthan, the state government has decided to impose Section 144 of the CrPC on Friday (August 20) in Dholpur district on Friday, banning all kinds of gatherings.

The order was issued on Thursday stating that it will be put into effect from Friday onwards.

CM Ashok Gehlot took to Twitter to remind the people to take due precaution and urged those who are not following the giuidelines to get checked for the virus.

“Section 144 CrPC imposed in Dholpur district, Rajasthan in wake of COVID-19 situation. Organising of public, social, political, entertainment, educational, cultural & religious gatherings/processions/festivals will not be allowed. This will come into effect from 20th August,” the government order reads. 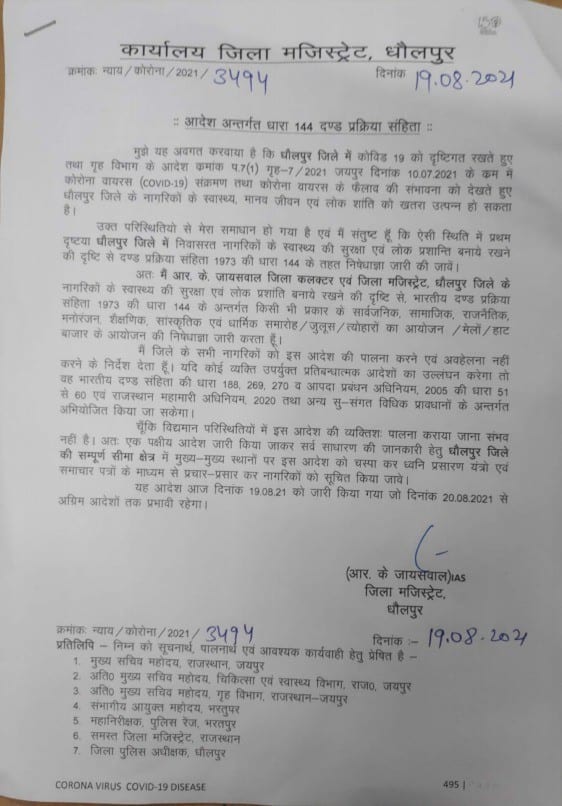 At the end of July, the state government had decided to lift the weekend curfew and introduce relaxations with certain restrictions as the state had seen a steady decline in active COVID cases.

Here are the guidelines that have been set in place by the state government:

– Cinema halls, theatres, multiplex operators who have made their seating capacity information online will be allowed to open with 50 per cent capacity from 9 am to 8 pm.

– In the similar manner, skill development centres in the state will be allowed to open with 50 per cent capacity from 6 am to 8 pm.

– Marriage functions will be permitted from 6 am to 8 pm with a maximum of 25 people.

– People coming from outside the state and have got the first dose of vaccine will no longer require a negative RT-PCR test report.

On Thursday, only 12 coronavirus positive cases were reported in the state. With new positive cases, the number of active cases rose to 153. No death was reported. Among the fresh cases, four each were reported from Alwar and Jaipur and one each from Bharatpur, Bikaner, Dholpur and Pali.